We’ve been to Paris twice and the Eiffel Tower has been on the list both times.  We scheduled it a second time because our son wasn’t with us the first time and our “traveling daughter” Gabby hadn’t either.  While I’m not sure if we’d do it on our next trip, it is one of the most popular venues in Paris.

That means you need to plan ahead.

You can buy a variety of different tickets to see the Eiffel Tower but the most affordable way is to purchase them ahead of time using this link.  At the time of this writing, tickets are 17 Euro for an adult and either 8 or 14.5 Euro for children.  You’ll want to make sure you choose the option for “Lift entrance with access to the Summit”.  The 1st and 2nd floor have a spectacular view of Paris but the Summit is even more special.  It’s supposed to be a few dollars more (17 Euro v 11) but both were pricing the same when I wrote this post.

If you notice, the title of the post is “Climbing the Eiffel Tower”.  The sane ones amongst you are asking, “They didn’t really walk up the stairs to the observation deck, did they?  I know Ed’s not in shape for that.”  You’d be right about the fact that I’m not in shape.  But wrong about the fact that we did actually climb the tower.  Of course, there’s a bit of a story, especially since we bought tickets for the overpriced tour.  Again. I spend plenty of time giving people travel advice, including the fact that you need to grab your Eiffel Tower tickets early.  As of this writing, the first day that tickets are available online is in early April.  While I was giving all that good advice I neglected to book my own Eiffel Tower tickets until it was too late.  We had a little bit of date flexibility but there was no space for our group of 5 in August by the time I got around to booking it (about 6 weeks out) for times that we wanted.

I turned to my backup choice, Fat Tire Tours.  We had a really positive experience with them the first time around.  They hold spots for most days and sell a variety of different packages.  The prices are variable depending on demand, but you’ll likely spend 50 Euro a person for the full tour including Summit.  We paid less than that last year but it looks like they’ve raised prices (as did the Tower themselves by a few bucks).  Needless to say, a big difference between 17 Euro and 50.

Because we booked so far in advance (and also because we only had a few days of free time in Paris) we ended up wanting to do our Eiffel Tower tour on a different day than originally scheduled.  This was another one of those instances where I didn’t do a good enough job planning things out.

We swung by Fat Tire Tours which is located a short walk from the tower.  We were hoping for a spot in one of their other tours so we could shuffle our schedule around.  When that didn’t happen, we decided to make the climb so as to keep our schedule intact.  The plan was to climb and explore the first two floors and then just come back later to grab our tickets for the Summit, skipping the tour part.

A ticket to climb will only set you back 7 Euro and there was no line to walk up to the top. The elevator lines can get kind of long, though the tours will cut you through the first part of that (but not the separate elevator line for the Summit).  Depending on which source you use, there are almost 700 steps to climb in order to get to the 1st observation deck.  I firmly believe it’s a lot more than 700, but I’m also a bit of a slug when it comes to exercise.  Even my wife and Gabby were tired out after climbing up and back down the tower, and they’re both in really good shape. Overall, it made sense to coordinate our schedules this way, though I could have done a better job planning. Learning from our unplanned experience, I wouldn’t be scared to climb the tower if you’re looking to save money, especially if you’re deciding between having to spend $50 or more and the long climb.  There are plenty of places to stop on the way up (and down), and some pretty interesting views. 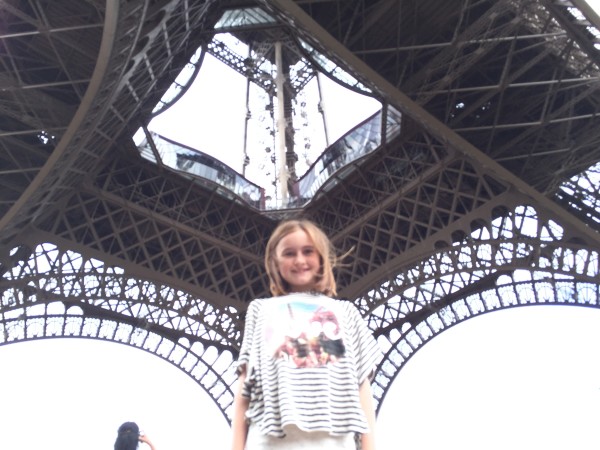 The post Climbing The Eiffel Tower.  Athens & Paris For Dollars A Day was published first on Pizza in Motion.