When we picked Arion as our home base for Athens, the Temple of Poseidon definitely popped out in our research.  Fodors had good things to say about it as did other research we did on the internet.  If we were staying in downtown Athens, I’m not sure we would have committed the full day to it, but from our hotel it was only about 45 minutes.

There is a Sixt car rental counter located at Arion, but they were sold out of cars during our stay, even though we gave them over a day’s notice.  The hotel had a backup choice who was willing to come to the hotel and drop a car off.  We didn’t need anything special and they dropped off a fairly new Nissan Versa Note. The drive down the coast was a pretty one.  The road not only runs along the edge of the cliffs it also runs through some of the steeper portions.  The views are outstanding.  There’s a few small towns on the drive along the coast and a few restaurant choices (more on that later).  We stopped at a few restaurants that faced the water and found some okayish seafood choices but not much for kids. Arriving at Sounio there was a small parking lot at the gift shop.  Most of the parking lot was filled with tour buses but they were all on their way out.  We were there later in the day which was a great time to see the sun going down.  There’s a snack shop and restrooms there as well.  A short walk up the hill will take you to the ticket counter.  It’s only 4 Euros and the views alone are probably worth that.  Along the way there are also a series of signs denoting what they believe the site looked like when it was operational. From the remnants of the village to the crumbling fortress walls and the columns left standing, there’s plenty of history to take in.  And, the views are outstanding.

If you’re in a rush, you can walk the whole site in less than an hour.  But, even with kids that sometimes gets anxious, we ended up spending closer to 2 hours and could have spent more time.  Nature mingles with history here as olive trees grow amongst the ruins. 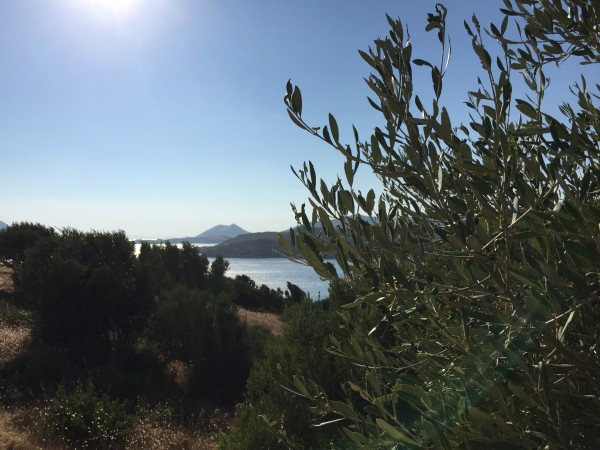 Although we didn’t make it to sunset, it’s supposed to be very beautiful at that time of day.  There were very few people at the Temple of Poseidon late in the day which definitely made it more enjoyable for us than our visit to the Acropolis and Parthenon.  Not saying this is a better place to visit, but timing is everything.