One of the nice things about Paris is that the major hotel chains generally have more than one property in town.  In many instances, there are 2 or 3 properties at different price points with decent locations.

We had a very enjoyable stay at Park Hyatt Place Vendome during our last trip to Paris.  While we considered it for this stay, our total of 5 people and a need for connecting rooms made that more complicated. While we considered a few SPG properties (Westin Vendome and Le Meridien Etoile), I settled on Hyatt Regency Etoile because neither of the SPG properties could guarantee connecting rooms.

The Hyatt Regency is located on the “other” side of Arc de Triomphe from Vendome in the 17th arrondissement, about a 10-minute walk from the Arc. The hotel is attached to a mall and a Metro stop.  This made for a convenient way for us to get around town.

We considered taking the train to Gare du Nord and grabbing a cab from there, something we did last time. We were arriving later in the evening so time was a bit more of the essence in getting the kids to bed.  We opted for Uber after verifying there was little traffic and were at the hotel less than 30 minutes later.

The lobby was busy when we arrived, though the high ceilings minimized any noise. The check-in process was efficient. The manager on duty came out to greet us and informed us we had been upgraded to the Presidential Suite! The suite was located on one of the top floors of the hotel (there’s a bar on the very top of the hotel) at the end of a hallway.  It consisted of two bedrooms and a spacious living room.  The suite is completely self-contained (i.e. not connecting rooms cobbled together), so there was no connecting doors to prop open.  It really felt like we had our own apartment in Paris.

The first thing that happened when we walked in the room was the realization by both my 9-year old daughter and our college age adopted daughter Gabby that they had a clear view of the Eiffel Tower out our window.  I’m not sure who screamed louder, but my money is on Gabby. The suite had a total of 2 full baths and one half bath. 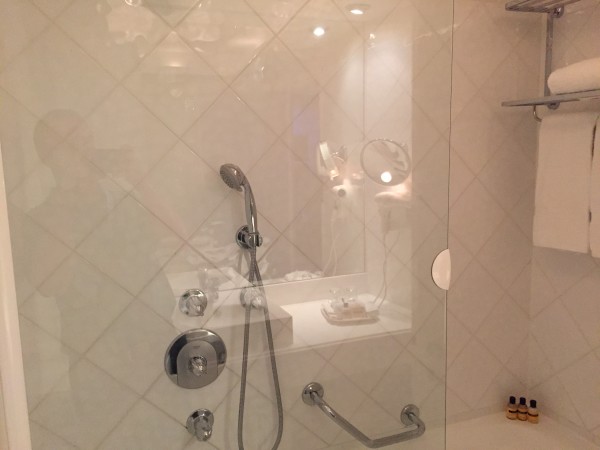 The large common room had a living room area with a couch and multiple chairs.  There was a boardroom/dining room table that sat our entire group comfortably along with a counter and some stools.  As a group of 5, we were literally swimming in space. While the room had a little wear and tear all of the soft goods (bedding, towels) were great and there were plenty of electrical outlets as well as a refrigerator.  It truly was a lovely room to stay in for our 5-day stop in Paris.  The views on a clear day were brilliant. The Hyatt Regency Paris Etoile is the most affordable Hyatt downtown from an award room standpoint.  It’s a category 4, which means 15,000 points a night.  When you consider that the Park Hyatt is twice the points, this property can be a real value, and still well located.

The hotel is supposed to be starting renovations this year.  I saw a sneak peek of the model room when I was there, but I wasn’t allowed to take pictures.  In short, I loved the concept for the new rooms.  Great use of space, very open floor plan, all the essentials you would expect from a modern hotel.  If you knew you were getting a renovated room at this property, there’s no doubt this should be most folks’ first choice in Paris.

I’ll be sharing some pictures of the club lounge (for elite folks), rooftop bar and fitness center in a future post shortly, but happy to answer questions about the hotel in the interim.