Downtown Salzburg is a very walkable city. Directly behind the hotel is Mirabell Gardens, or Do-Re-Mi fame from the movie. At the far end of the park was a small beer garden where we hung out for a while to enjoy an Austrian beer. Across a small bridge you’ll find a garden of stone gnome statues that the kids had some fun with. Yes, That’s A Chicken In His Hands. Feel Free to Caption Accordingly

From above, we could see a park with a monster teepee and slide down below us. It took a few minutes to figure out how to get there. Once we were there, the teepee proved to be awesome. The slide bordered on dangerous and was a ton of fun. That’s One Heck Of A Teepee And, in this video, those are my sneakers about to get launched!

The hotel is only a few blocks from the river. Within 15 minutes we were walking along the banks of the Salzach River. There’s shopping on both sides of the river. We found the side the Sheraton was on to be less “touristy”. Both were fun neighborhoods to walk around. 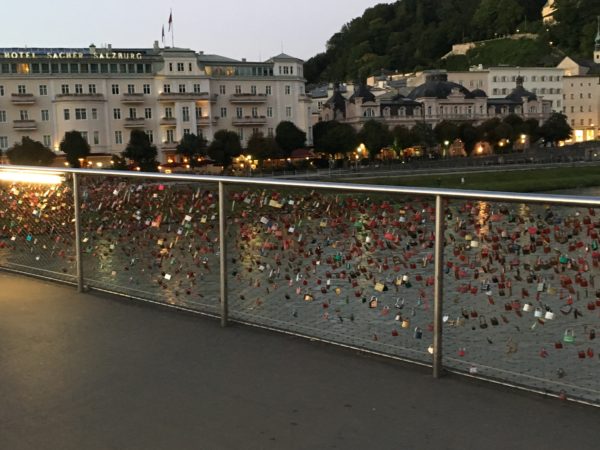 You’ll find a handful of restaurants with outdoor seating here and there. We discovered a few bakeries and some souvenir shops that were a bit more authentic as we wandered through the city.

Downtown Salzburg doesn’t take long to explore. Parts of it are certainly picturesque. It didn’t feel as sprawling as a city like Paris, and certainly not as buttoned up as Frankfurt. It’s the sort of city I could see enjoying time in again. There were a few things we chose to pass up on the sightseeing tour, electing to drive to the outskirts of town for some activities. More on that in future posts….