People talk about how bad the traffic is in places like Los Angeles with plenty of adjectives.  And, it is quite bad.  But, the traffic in DC is what I refer to as “stealthy bad”.  It doesn’t get the same press that LA traffic does, but a trip that normally takes an hour can easily turn into a 3-hour ordeal.

With visiting dignitaries, protests and construction as variables, weather can also wreak havoc on a system that consistently backs up during rush hour.  For those of us that live in the DC area, we think of the Beltway as something of a DMZ.  Anybody who lives inside the Beltway (closer to DC) doesn’t like venturing out into Northern Virginia and vice-versa.  This is especially true for airports.  That’s why I was happy when plans were announced to extend the Metro out to Dulles airport (and disappointed when that stop wasn’t included in the first part of the expansion).

We now have the Silver Line, which reaches out to Reston, Virginia.  That’s not all the way to the airport, but it’s close enough to navigate around a big chunk of rush hour traffic.  I’ve done the trip twice now, landing at Reagan National Airport (DCA) and taking Metro out to Reston.  Here’s how:

There are two walkways from the terminal at DCA to the Metro platform.  There are plenty of signs to guide you there.  I used the walkway between the A and B concourse.  A short walk up the hallway (with the help of a moving walkway), and the first right-hand turn will put you at the ticket booth. While there are usually attendants on duty to provide information, you’ll generally need to learn how to use the ticket booths.  They’re pretty straightforward.  Be sure to note whether you’re traveling during peak or off-peak, as the DC Metro fees are distance-based unlike New York City where it’s a fixed fee to take the subway on a one-way trip. Once you’ve purchased a ticket you feed it into the front of the automated turnstiles and retrieve it from a slot on the top.  Then, you’re headed upstairs, following the signs for the Blue Line towards Largo Town Center via Washington, DC.  This might seem backwards to folks familiar with the area, since Large is East, in Maryland.  But, as you can see from the map below, you’re headed North to transfer in Rosslyn.  The Blue Line ultimately hooks East from there and heads through DC to Maryland. 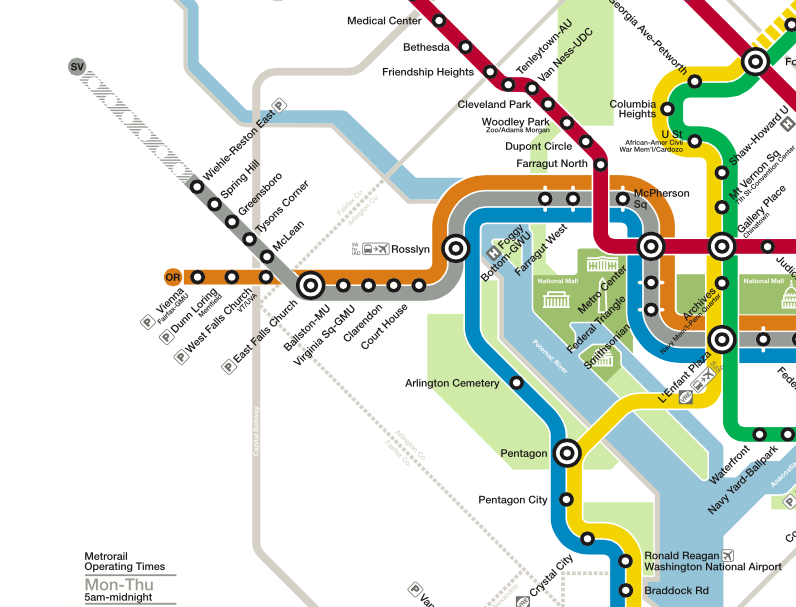 Once you reach the top of the escalator, the Blue Line trains will be on your right-hand side.

Important note!  Yellow line trains leave from the same track, so make sure that your train is, in fact, a Blue line train.

Once onboard, you have 5 stops (or just shy of 15 minutes) to get to Rosslyn where you’ll transfer to the Silver line.  If you’re facing in the direction of travel on the train, doors will open on the left.  You’ll need to go downstairs to get to the correct transfer platform.  There’s an escalator or, if you need it, a very slow elevator. Things get a bit more complicated downstairs, but as long as you pay attention you’ll find yourself on the right train.  This platform is served by Orange, Blue and Silver trains (remember, you’re looking for Silver).  There are update boards that tell you which train is coming next as well as some harder to see panels on the trains themselves. Once onboard, you’ll have 10 stops (roughly 30 minutes) to get to the final stop on the line, Wiehle-Reston East.  All told, the trip can be done in as little as 50 minutes.  That’s longer than by car with no traffic (30 minutes) but far shorter than a rush-hour car ride. At Reston, you’ll find taxis and buses, a kiss & ride for people to pick you up and plenty of Uber cars nearby (I usually have Uber meet me at kiss & ride).

I’m generally a fan of trains/subways when I travel as a consistent means of travel, though I also use my fair share of Uber.  A Metro ride from DCA to Reston will run you a bit less than $5 during off-peak hours, plus another $15 to get a cab or Uber to Dulles, versus a normal cab/Uber fare of $75 to $100 between the two if there’s not much traffic.

For those that prefer the convenience/savings of mass transit, consider the Metro the next time you need to get to/from the DC-area airports.

The post How To Use New Metro Silver Line To Get Between Dulles and Reagan Airports was published first on Pizza In Motion.