zWith another travel year in the books, I took a few moments to see where I’ve been and consider where I’m going.  I started out the year thinking I would travel more on American and less on United.  While that happened, a number of things came together to lock up both Executive Platinum (American Airlines’ top-tier status) and 1K (United Airlines).

Here’s some tidbits from the travel year, courtesy of my Flight Memory page:

This was my highest volume flight year to-date, though only by a few thousand miles.  If you look at the number of hours, I spent approximately 5% of 2013 on planes.  That’s a bit sick if you ask me.  JFK-LHR was my longest flight this year, making the 159K mile figure tiring, 128 flights in all.  So, how does this all look on a map? The list of airports has some new candidates, including Burbank, Copenhagen, Kansas City, Oslo and Panama. American lead the way in total miles, with United 2nd.  I picked up a total of 20,000 EQMs/PQMs by virtue of spending on co-branded credit cards, had some partner flights, but that still would have left me short.  But, over the course of over 100 flights, there are anomalies.  I had a few instances when I was significantly delayed due to mechanical reasons and asked to be switched to another airline to get to my destination.  Coincidentally, these happened to be longer flights (transcons for the most part).  Easy example.  I’m supposed to fly United IAD-LAX, but their plane breaks.  They put me on American, flying the same route so I can get to my meeting.  I earn miles on American and also earn miles on United by asking them to award me original routing credit.  Double dip!  I also ended up getting lucky a time or two when I flew standby on an earlier flight.  Sometimes, when the gate agent processes your flight change they book your next segment into Y (a full-fare coach bucket) which yields bonus qualifying miles.  Through a few of these breaks I was able to squeeze out top-tier status on both carriers.  I likely think that will end this year as I don’t see a way to get 100K miles on both American and United.

As far as first class upgrade percentages go, this was again a tale of two cities.  I had 68 flights on American this year and missed upgrades on 2.  This was double any previous year I can remember, since I’ve only missed one upgrade per year the last few years.  Both missed upgrades were on the IAD-LAX route which is heavily traveled by folks willing to purchase first class or full-fare coach tickets (that upgrade to first automatically).

On the other hand, I had 48 flights on United.  20 of those were in Economy Plus.  6 of those were in economy, though in the case of two of them the plane didn’t have a first class cabin.  So, giving United the benefit of the doubt I scored a craptastic 50% for upgrades on United.  And, that’s as a 1K.  Thanks, United!

I think my strategy is largely the same in 2014 as it was in 2013.  I hope to focus more of my flying on American, though that could change if the merger with US Airways changes things markedly.  I don’t expect it to early in the year, but by the end of Q2 who knows?

I have already achieved as much as I can in terms of lifetime status on American.  They award lifetime Platinum status for 2 million miles, which I passed years ago.  I should pass 3 million miles in 2014, though there are no extra status awards at that level, but some extra systemwide upgrades.

On United, I only have about 300K lifetime miles.  I’d need to get to 1 million to achieve lifetime status there. Since I don’t see myself exceeding 100K miles in any given year that goal is at least 7 years away and probably longer.  Thus, lifetime status on UA doesn’t play into my 2014 strategy.

I’m looking forward to trips to Paris, Dubai and Cabo San Lucas in 2014 and hoping I can squeeze in a few more fun destinations with the family that I haven’t thought of yet.

I also took a look back at my overall flight history.  I’m still missing some flights, but I’m at roughly 1 million miles flown in my lifetime.  That’s small compared to some friends but it still seems kind of staggering to me. 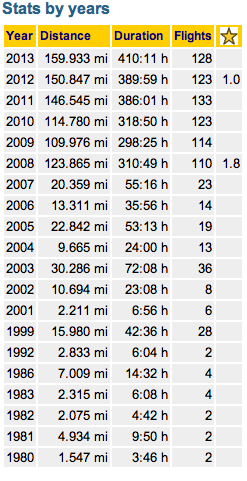 The moral of the story is that everything now resets to zero.  I was discussing this with Gary of View From the Wing recently, and he commented on how he starts out each year having no idea how he’s going to fly 100K miles and re-qualify with his favorite hotel programs.  I feel the same way.

The counters are at zero.  What’s next?