When Hyatt first took it back over, they branded it The Concourse.  It was managed by Hyatt but still had serious problems from a physical plant standpoint.  I was hopeful this property would turn out well.  The other full-service options near the airport are less than desirable.  My initial “go-to” property at LAX was the Sheraton Gateway.  Really nothing special but worked out as a member of the SPG program.  More recently, I’ve stayed at the Hyatt Place LAX/El Segundo.  It’s a newer property, but a bit further away.  The shuttle can be a bit of an issue.  The Sheraton is a 20-minute walk to the United terminals, 30 minutes to American Airlines/Tom Bradley.  I like controlling my own destiny as opposed to waiting for a shuttle, hence the hope for a positive experience at Hyatt Regency LAX.

The property had a significant amount of renovation work to do.  They completed most of it late last year.  My brief stay was…brief.  I’ll try to hit more areas of the property the next time I stay.  For now, here’s a quick summary of the guest rooms.

If you head towards either Terminal 1 or 7, you’ll come to the entrance to the airport loop.  I generally fly into Terminal 4 or 6/7, so from that side you cross to the parking garages and head towards the center of the loop.  You’ll see some LAX signage, then a small courtyard you can cross over to.  If you’re traveling at night, the lit pillars are a great landmark.  Once you pass through the courtyard, hang a left.  You’ll see the hotel a few hundred feet down diagonally across the intersection.  It normally takes me about 10-15 minutes to make the walk. I was in a standard king guest room for my brief stay.  The design/color scheme was simple and bright.  There were two seating areas in the room.  There’s also a flat-screen television, a coffee station and small refrigerator.  While I liked both seating areas, I would have appreciated a true desk instead of the small table with two chairs. The bed was comfortable, as expected.  Night stand lights are convenient, as well as a variety of both regular outlets, USB outlets and audio input/output.  Simply put, there’s a lot of technology bedside. 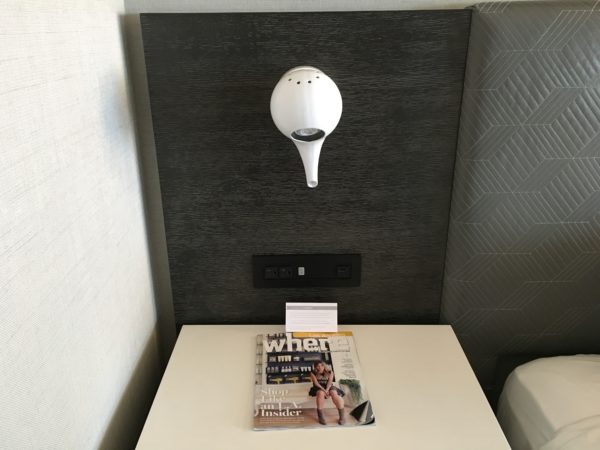 There’s also a small open closet, some drawers and a safe.  My room had a robe hanging up. The bathroom was compact and clean.  A shower (no bathtub) and a round rain shower head complement a simple back-lit white vanity. Overall, I found the room product to be more than satisfactory for an airport hotel.  The close proximity/short walk and brand new rooms make this an easy choice when you need to stay at LAX.