We spent just shy of a week at the Hyatt Regency Coconut Point and enjoyed the entire stay.  As part of this mini-review, you can see my previous posts:

The hotel has a number of dining choices.  Some are about what you’d expect at any hotel, such as a standard buffet/a la carte restaurant.  In addition, the hotel has a few outdoor bar/grill options.  There’s Mangroves and Belvedere Room, a couple of areas to relax for drinks, light fare and various entertainment options.

There’s the previously mentioned Cool Beans, where Charlie got his daily ice cream fix.  They’ve got a number of grab and go options and can put together coolers for beach trips, etc.

The two experiences I’ll touch on in more detail were at Tarpon Bay, the on-site seafood restaurant, and Tanglewood, where we enjoyed the breakfast buffet one morning.

Tarpon Bay is located in between the hotel and the pools, maybe a 100 ft walk from the lobby.  There’s a quiet area out front with rocking chairs and a fountain if you end up having to wait for a table or are just looking for a place to lounge during the day. Tarpon Bay is the sort of restaurant that we might have chosen even if we weren’t staying at the hotel.  We’re seafood fans and the menu was a good fit for us. The menu starts off with a selection of ceviche.  I think my father was eyeing these from the moment we sat down.  We ordered the shrimp and tuna version and were quite pleased with both.  My father also ordered half a dozen oysters to get things started. For dinner, Michelle ordered the seared tuna, which was cooked to perfection.  Tuna definitely doesn’t need to be overcooked. My father went with surf & turf which disappeared quickly from his plate. I went with “surf & surf”.  I wanted Catherine to get another chance to try lobster.  I had thought about trying the local grouper wrapped in bacon but went with the slightly healthier (?) option of lobster drenching in butter. All of the entrees were great and we transitioned to dessert shortly thereafter.  While we were ordering dessert I actually had a fan of the blog come to the table and introduce himself.  Amidst the din of the kids and ordering dessert I don’t actually remember his name but it’s always nice to meet folks on the road.  So, thanks for stopping by!

We chose an option called “cookies and milk”, which was some vanilla ice cream with homemade cereal-themed cookies, including a honey nut snickerdoodle, a cap n’ crunch cookie, rice krispies peanut butter squares and a corn flake marshmallow cookie.  Mmm! Michelle went with key lime pie, her favorite.  And, my father ordered his favorite, vanilla ice cream (though he did let the kids squeeze a small dish of raspberry sorbet on there for them to snack on). The waiter finished off our meal with a little snack of “worms and muds” to make the kids laugh. 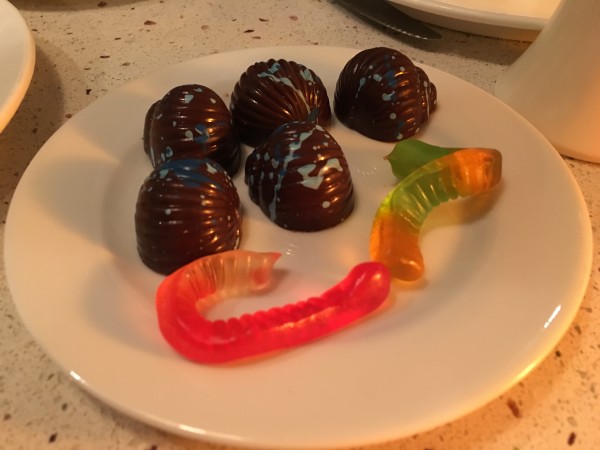 It was an enjoyable meal all-around.  I really like when I find high-quality restaurants on-site when we’re traveling on a trip like this.  I don’t pick hotels for their restaurants, nor do I generally research restaurants ahead of time before trips.  This is definitely a place we would have considered even if we weren’t staying at the hotel.

While we ate in the lounge most mornings we did grab breakfast in Tanglewood one morning.  It was something the hotel gave us for free due to a small problem with our room (way over-delivered on the service rescue).  The lounge is plenty for a good breakfast but Tanglewood has a wider selection for those interested. Because we had lounge access I likely wouldn’t pay full boat for the breakfast, despite the fact that we all enjoyed it.  I’d personally rather spend that cash on another meal at Tarpon Bay!

The hotel is a Category 4 in the Hyatt Gold Passport program, which translates to 15,000 points per night.  And, because it’s a category 4 it means you can use the free night you receive as an annual benefit of the Hyatt credit card at this hotel.

We enjoyed all facets of our stay at Hyatt Regency Coconut Point.  We found plenty to do between the two properties and plenty of good food.  We did venture off-site here and there but didn’t feel an urgent need to find other activities.  We’re super excited for the expansion of the water park/pool area.

I struggle to point out any negative aspects to our stay at Coconut Point.  It’s affordable for award stays and the paid rates don’t seem exorbitant.  For those flying in, Fort Myers is close and easy to travel through, even though it was pretty busy during spring break.

We’re super excited for the expansion of the water park/pool area.  We’ll have Hyatt Regency Coconut Point on our list to return once it does.