It’s been quite a while since I’ve stayed at a Le Meridien hotel. If my memory serves me correctly, it was 6 years ago at Le Meridien Barcelona on La Rambla.

It’s possible the brand standards have shifted since then, but I don’t think that was the case. This was a curious stay. Not necessarily bad in all respects, but likely one that won’t yield a return visit anytime soon.

To start, I need to compliment the front desk staff. They were exceedingly nice as well as very attentive. They remembered us in the morning from our check-in the night before and wished my daughter good luck in her race that morning. When we returned, they asked her how she did and made her feeling a superstar.

The lobby is a sprawling, comfortable space with plenty of areas to find seclusion.  In a lot of ways it reminds me of the Hyatt Mag Mile in Chicago, an upstairs lobby that offers a quiet space a few dozen feet above a busy street. The rooms were nicely furnished and in a good state of repair. The beds didn’t have conventional box springs, which struck me as odd. Still, it was a comfortable mattress. Power was scarce around the bed. The desk area had plenty of space to work at, an ergonomic chair and plenty of power outlets. The TV was a new LG flat screen with a beautiful picture. Not all channels were HD but a decent number were. There was no coffee machine in the room. They did include a voucher for a free cup of coffee in the restaurant. But, with the rest of the family wanting hot tea, I ran across the street to Starbucks and played delivery boy. The bathroom was clean with no signs of age. Odd for an upscale property, the toiletries were bulk dispenser bottles bolted to the shower wall, a la your local health club. Those do not strike me as upscale.  Something of a pet peeve for me when traveling with young kids, the bathroom door did not appear to have a lock. I think there was a minibar, as there was one cabinet in the TV stand that was locked.

There’s really not much of an in-room guide to the hotel and I couldn’t find any notation about an ice machine. The front desk did share with me that they’re on odd floors, so it was just a short elevator ride.

For Platinum members, you have 3 choices for your amenity. You can choose the standard bonus points, an in-room amenity or a full breakfast buffet in the restaurant. We chose the breakfast and received coupons valued at $17.00 each.

When we arrived for breakfast the following morning the staff was still setting up the buffet. We weren’t offered menus, but we wanted to choose the buffet anyways. On the weekend, the restaurant isn’t scheduled to open until 7 am. By the time they were set up, it was about 5 minutes after, with a few buffet items taking another 10-15 minutes.

The restaurant appears to have a noticeable fruit fly problem, as shortly after the staff set out the cold buffet items the flies had already taken their positions on a number of food items. The staff was doing their best to deal with the issue but fruit flies are not really deterred. We only had a short time to eat and left shortly after sitting down due to schedule.  Had we more time, the fruit fly problem likely would have killed any desire to hit the buffet a second time. 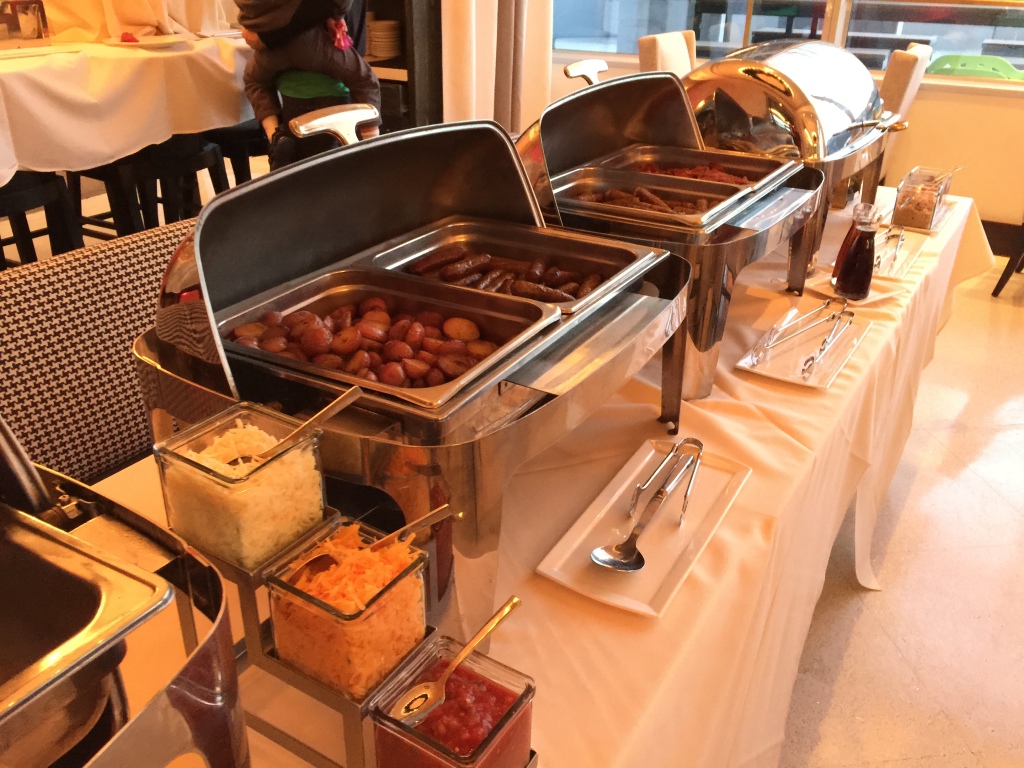 For those who might be sensitive to noise, my wife noted that she could hear planes in the flight path to Reagan airport. I’m way past the point of an airplane engine waking me up, usually the contrary.

There’s a valet in the front of the hotel that’s $30 a night. The self parking was located around the corner and I knew we would need access to the car at an early hour so I chose that route. The website notes $18 for self parking. However, the parking garage is part of a complex called Waterview, and upon exiting I was charged $10. I didn’t mention to the hotel that I had paid in the garage nor did I ask. So, I guess they just mark up the price if you park through the hotel.

The hotel gym is shared with the residential units in the same tower.  It’s a decent size with current generation equipment.  There were a few people working out the two times I popped my head in but it was mostly empty, plenty of equipment available for a workout. The hotel is very convenient to DC proper and may be found for much lower prices than some of the hotels across the river.  It’s also a quick 5-minute walk to the Rossyln Metro station to get into downtown DC.  This hotel is relatively new.  It was a Kimpton for a few years and has been a Le Meridien for about 2 years.

The property is a Category 4, which means 10,000 points a night.  The rooms are very nicely furnished with a few shortcomings.  The restaurant service staff were friendly but the fruit fly issue is likely a future non-starter for me given all the other SPG properties in the area, or at the very least choose a different amenity.

Oh, and for the record, my daughter finished her first 5K, with mom beside her crossing the finish line no less!