It’s interesting how changes in hotel loyalty and credit cards can sometimes have a ripple effect.  I’m a business traveler who also loves to share the world with his family.  For much of the past 10 years, I’ve been both a Platinum member of the Starwood Preferred Guest program as well as a Diamond member of the Hyatt Gold Passport program (now Globalist in World of Hyatt).  There have been plenty of changes in both programs along the way.

Back in April we learned what the new combined program would look like.  Well, mostly.

There was some initial frustration from SPG members on how they ended up with the short straw on lifetime status.  After a few small changes, Marriott ended up at a much more inclusive strategy for how to hand out lifetime status.  Now, we stand just about two weeks away from the combination of the two programs.

As we near the 2-year mark from when Hyatt first announced their new program, we’ve covered quite a bit of ground.  Gold Passport would become World of Hyatt.  We’d see requirements change for elite status, along with an improvement in benefits at the highest level.

They changed lifetime status, making it much better.  They also announced that award nights would count towards elite status requirements.  And, that free nights awarded would have extended expiration dates.  Hyatt even went so far as to retroactively credit those award nights and bump up people’s status level.  I thought that was a pretty classy move.

Hyatt folded in a home sharing option, in kind of a big way.  And, they adjusted Globalist suite upgrade awards, recognizing a fairer expiration policy. This year marks the final time where I’ll select an SPG 50 award.  I’ve stayed 50 nights at Starwood hotels so far this year.  That means I need to pick one of the SPG 50 awards.  In the past, I’ve always picked Suite Night Awards even though I’ve struggled to make good use of them.  This year, the list of choices was as follows:

This was really a choice of 3 for me.  I don’t see enough value in Gold status to gift it to someone.  I have no problem with UNICEF.  Heck, I flew a humanitarian mission to Djibouti with them.  But, I’d rather make my donations straight to charities.  And, I have no need for a bed.  That left Suite Night Awards, a free night and the 5-night credit to elite status.  My goal is to try to hit 100 nights one more time with SPG to keep an Ambassador for one more year.  Next year, Marriott’s new rules will require me to spend $20,000 on top of 100 nights, something I won’t come close to. 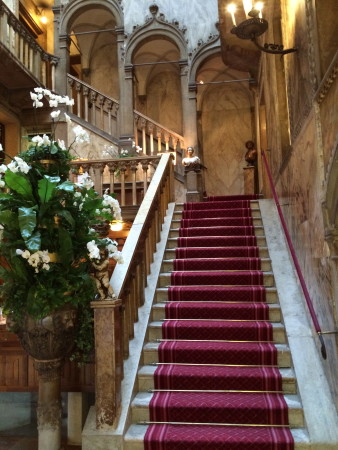 How Is Hyatt Helping Me With SPG Status?

I gave some serious consideration to the 5 nights credit towards elite status.  I expect to be stretching it quite close on my 100 nights this year with SPG.  And, that’s when it hit me.  In reality, it should have hit me earlier. World of Hyatt revamped their credit card recently, along with everything else.  Amongst the changes is the ability to earn elite status from credit card spend.  For every $5,000 spent on the card I can earn 2 elite qualifying nights.  So, spend $15,000 to get 6 nights if I need them (or any multiple of $5,000 for the number I’m short).

With that plan mapped out, it was an easy decision to choose Suite Night Awards.  I didn’t seriously consider the one free night because I thought there was a better chance that I could get more value out of Suite Night Awards or the elite status bump.  I also didn’t have any stays coming up where I could easily make use of a Category 5 free night award to get maximum value.

I may still end up with 60 nights at Hyatt and 100 nights at SPG by the end of 2018.  For the moment, I’ll focus my stays with SPG knowing that I can make up ground with Hyatt by shifting spend to their credit card.  That comes at the same time that I’ll be putting less spending on my SPG AMEX for the first time in over 15 years.  The new changes to that card make it much less valuable for everyday spend.

It’s a bit odd to be using the World of Hyatt credit card as my backup plan for helping me hit 100 nights with SPG. But, it made my decision for Suite Night Awards an easier one.  Now, to actually squeeze some value out of those awards…..

The post How Hyatt Is Helping Me Get Higher SPG Status (And Why I Chose Suite Awards, Again) was published first on Pizza in Motion