Wichita was definitely a city that impressed me.  I’ve been pleasantly surprised by a handful of smaller cities I visited this year.  Wichita sits at the top of the list.  It’s not just the rich history of aviation (there’s plenty of that).  But, Wichita is a first class donut city.

By now, anyone who follows me on Facebook, Twitter or Instagram know about my, ahem, affection for donuts.  If you follow along here you’ve seen my first few installments of Donuts Across America, including:

I had the opportunity to check out two donut stops in Wichita.  Both held their weight, but there was only one true winner.

The folks in Wichita found out about my donut habit before I got there.  When I checked into the Hyatt Regency Wichita, I had a small care package waiting for me, complete with addresses for the best donuts Wichita had to offer. As a side note, the Hyatt Regency Wichita was an excellent surprise.  The staff were incredibly friendly.  On the second day of my stay, in-room dining already had my order memorized.  It’s easy to say that my opinion was influenced by the little care package they left.  Sincerely, though, one of the best small-town hotels I’ve ever stayed at.  If you don’t believe me, ask Mommy Points.

Let’s Get To The Donuts

I was in town for the Results Junkies North American Tech Tour, sitting down with entrepreneurs trying to start/grow/accelerate their businesses.  The guys from Clutch Studios were one of the best hosts we’ve had on the tour this year.  Carlos Fernandez showed us everything Wichita had to offer.  In fact, you can even see some donut hunting in one of the great videos they put together.

They did their research as well, since our first stop of the morning was Donut Whole.  Located in the heart of Downtown Wichita, the variety of donuts is a bit mind-boggling.  I ordered 3 dozen donuts for the crew and didn’t even get one of each variety.  Don’t worry, I covered almost all the bases.  My favorite (and it wasn’t even close) was the Caramel Sandwich Cookie Donut.  It’s a chocolate cake donut with vanilla icing.  Then, they sprinkle chunks of Oreo on it and drizzle it with caramel.  Holy hell, this was a great donut! 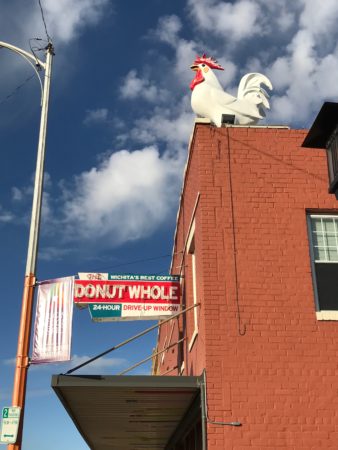 The atmosphere was Portland/Denver-ish funk, perfect for a donut shop.  My only regret was that I didn’t get to come back and play the old-fashioned Airport pinball machine.  A donut shop with aviation-themed pinball?   You can bury me here! Airport Pinball In A Donut Shop!

Day 2 saw me needing to run an errand that had me dangerously close to Hurts Donuts, the other local favorite I was recommended.  I love their Emergency Donut Vehicle.  I need one of these!  Icing bandages! The donut choices were equally broad at Hurts.  My favorite here ended up being the Little Timmy.  A buttermilk cake donut densely covered with those tiny round sprinkles you find on ice cream and nonpareils, topped with an iced animal cracker.  That being said, the glazed (yeast-raised) donut was equally as awesome, and one of the best glazed donuts I can recall having. Along with lots of funny sayings on the wall, I liked Hurts Donuts ideas on coupons.  You can purchase a lifetime “buy one, get one free” donut coupon from them.  It’s a t-shirt with their logo.  The shirt itself costs about $20.  I think that’s overpriced in general.  And, from a marketing standpoint, I think they want tons of people wearing these shirts.  At any rate, I got a good chuckle out of it. Donut Whole, hands down.  The atmosphere was awesome.  The staff was totally into it.  The girl behind the counter was explaining why she chose some of the names (OG Buttermilk just sounds better than Original, she said).  They were totally cool with a camera crew and 20 people crashing the donut shop and taking over for 30 minutes.  And, I was totally cool with their awesome donuts.  Hurts is a good choice, but I didn’t love some of the other donuts I tried.  I’d go back for a glazed if I was nearby.  I would drive out of my way to go back to Donut Whole.

Mark it down.  There are world class donuts in Wichita!

The post Donuts Across America:  Battle of the Best Wichita, Kansas Has To Offer was published first on Pizza in Motion